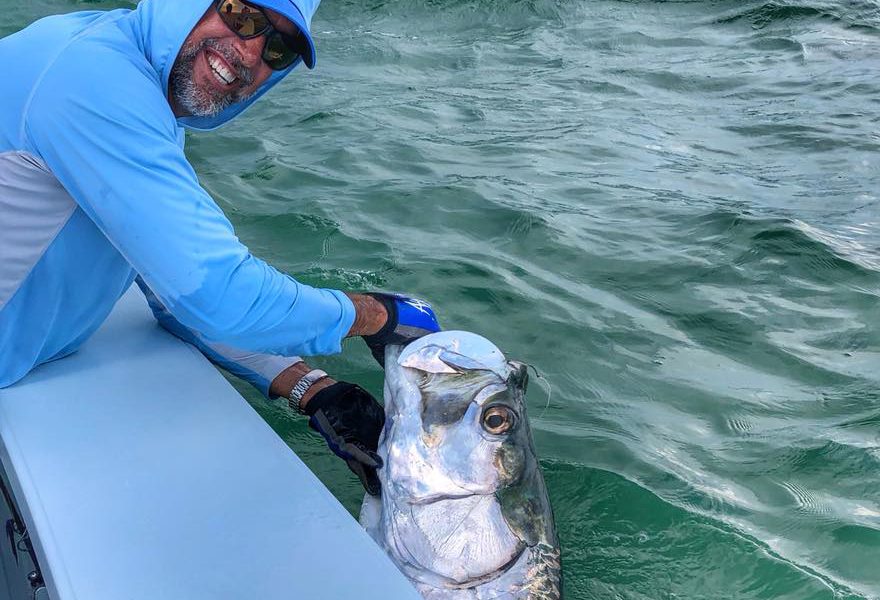 “Many captains search out and move around for tarpon, but my game plan is usually sticking in the right spot and waiting for the tarpon to come to us,” Richardson said. “When you’re fishing off the beaches in May and June, tarpon like to cruise the 6- to 10-foot depths of the channels. I’ll stake out on the edge of a sandbar in 3 to 5 feet of water, right on the outskirts where it slides into the channel, and put the 8-foot Power-Pole Blade down,” Richardson noted. “Tarpon cruising through the channel may be just out of casting range, so I’ll hit the button with my foot to lift the pole out and drift along the flats, then set it down where need be to reach the tarpon line. In essence, I use the Power-Pole like a push pole, without all the sweat and energy.”

“Fishing off the beach is very visual. Sight casting shallower waters means tarpon can’t sound and will consequently jump often and expend energy quickly, where a 70- to 100-pound fish can be boatside in less than 30 minutes,” Richardson said. “Fishing during the highest sun seems best, but we venture out early and blindcast during predawn hours for optimal action.”

“The most productive tarpon colors always seem to be brown and purple, maybe pink during stormy weather,” Richardson said. “I think the darker colors, especially on that MirrOlure Demon, resemble crabs better.”

“Hands down, live crabs are the best tarpon baits,” C.A. stated. “Crab fishing is exceptionally productive during big full moons on outgoing tides, when there is a big-time crab flow.”

Richardson preps two rods ready to pitch. One is rigged with a freelined weightless crab. The second setup works with a Bimini knot from the braid to an Albright-knotted 50-pound fluorocarbon leader with a small red bead slid on, then cork float, hook and finally live crab to create a sliding slip bobber rig. The crab can be cast out farther with the added weight of the cork, and when it settles, the crab will slide down to a 4-foot depth under the float cork.

“We look for the fish to suck down that cork float crab bait, but if a tarpon turns its nose at the cork rig, I can quickly send out the freeline bait,” Richardson said.

Up your game this tarpon season. Put Capt. C.A.’s tips in your back pocket, and put it to the poons. See more from Richardson at www.captcarichardson.com.