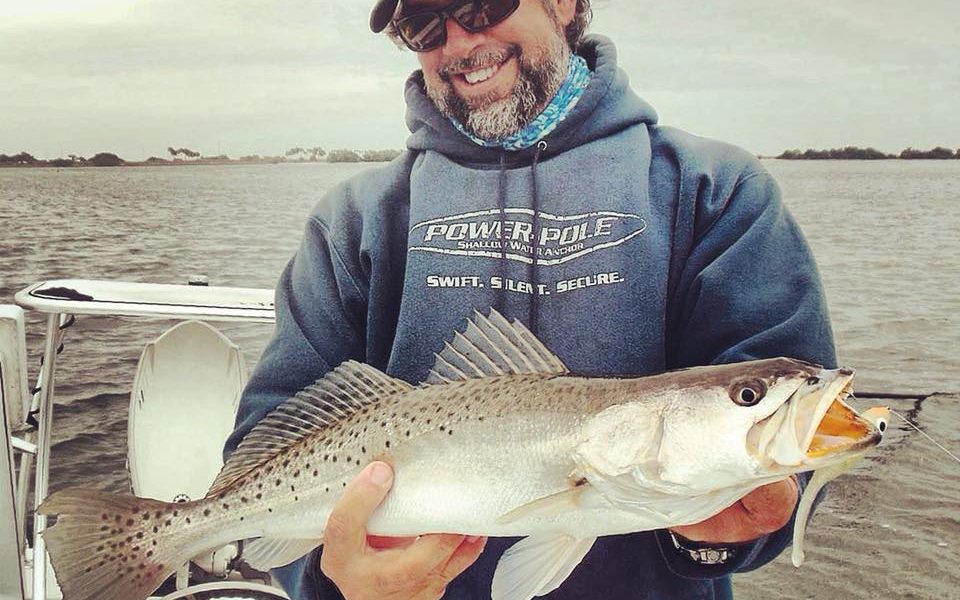 “Late February through April is prime time, as the fish are on the spawn and usually strike with reckless abandon,” Richardson says. “West Coast gulf trout aren’t as large as they are on the East Coast, as an average trophy will be between 20 and 29 inches here from Yankeetown to Charlotte Harbor. But the big pigs feed the same way.”

Richardson is fishing waters less than 2 feet in depth, and that’s where his Power-Pole shallow water anchor gives him the edge.

“Big seatrout have incredible spatial awareness,” he says. “They can feel any vibration in the water, from a humming motor, a dropped jig on deck, or even spooked mullet that will trigger them to alert — so you need to sit super still. And that’s where the Power-Pole shallow water anchor helps out immensely. I’ll stick the Power-Pole shallow water anchor down to stay a good, long distance cast and a half away. It allows me all the stealth I need.”

Larger trout have the body fat to stay in the shallows, sometimes only a foot deep, darkening in color to absorb the sun’s warmth as they sit to ambush baitfish passing by. To trigger a reaction strike, Richardson will work the water’s surface with topwaters and poppers.

“The key to fishing any lure at this time is to work it ultra slow,” Richardson says. “These fish are going to want to eat one big meal at a time. Topwaters should be worked with a click-clack style, popping it slowly and methodically once every second or longer. A slow rolling lure is irresistible and will easily convince them to expend the energy to pursue.”

“A good time to focus on finding larger fish is after a cold front moves through,” says Richardson. “By the third day, the trout will be back on the flats. Bluebird skies with the sun high up illuminating clean water means changing up to suspending baits like the Paul Brown or MirrOdine XL plugs, as well as 5-inch Jerk shads, Senkos and DOA paddletails. You still want to work the bait super slow, twitching it as if it is dying.”

“Monofilament is much easier to cast, plus it has enough stretch, whereas braided lines with no give tend to pull the hook out of the mouths of trout,” Richardson says.

Trophy trout await in the Florida Gulf. Scale down, slow down, and put the Power-Pole down.