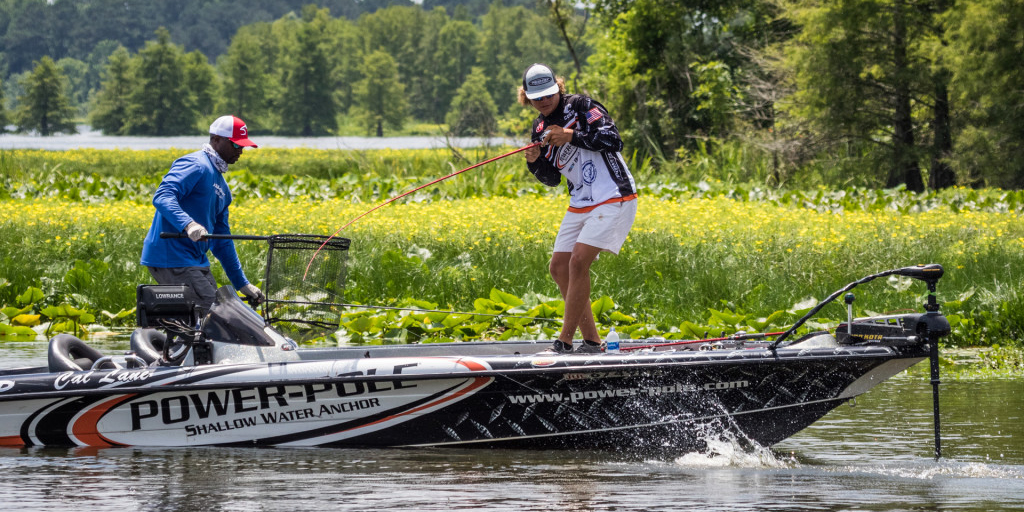 GUNTERSVILLE, Ala. – For Cal Lane, competitive bass fishing is a family tradition. Having a Power-Pole logo on their jersey is too.

Cal, the son of Power-Pole title angler and former Bassmaster Classic champion Chris Lane, became the youngest competitor on the FLW Toyota Series this year. He also joined his dad and uncles Bobby and Arnie to become the newest member of Team Power-Pole.

“It’s amazing because I know what Power-Pole is and what they stand for,” Cal said. “I watched my dad be a part of it and got to grow up with the company as it grew. I’ve got to know the people who work there and they’ve always made me feel as though I’ve been part of the family all along. It’s an honor to represent them now.”

“I think it is fantastic,” father Chris said. “I’m honored that he not only wanted to follow in our footsteps but I’m also proud that he wants to be outdoors instead of inside playing video games.”

Cal’s decision to follow in the family business of fishing started to become a reality when he started fishing – and finding a level of success – in local tournaments starting at the age of 16. This season, at the age of 18, Cal finished sixth overall in the Southeast Division of the Toyota Series, including a Top 10 finish on Neally Henry, earning him a spot in the series’ championship in December. He also fished his local FLW Bass Fishing League circuit in between.

“It’s been really cool to fish against the people I’ve grown up watching like Jordan Lee, who is one of the best anglers in the world, and be on that same water,” Cal said.

Those initial successes convinced Cal to eschew college and, along with his starting his own landscaping business, become a full-time competitive angler. Along with the Toyota Series’ Southeast Division events, Cal plans to travel for as many tournaments as his schedule will permit with the ultimate goal of joining his Dad and uncle Bobby on the MLF Bass Pro Tour.

“They’ve been talking smack already so I hope I can make it,” Cal said.

First, he knows he still has a lot to learn when it comes to making fishing a full-time career, especially when it comes to the grind of a long season and travelling to far away tournaments.

“There’s a lot that changes when it is just you,” he said. “I’ve learned to slow down and be patient. My Power-Pole helps with that because it forces you to stop and take your time when you are fishing an area. I’m learning you have to be very patient with everything.”

While Cal is honored to carry on the family tradition, both he and his dad agreed that it was a decision that Cal made on his own. While Chris was always willing to teach his son everything he knew about fishing and what it takes to succeed in competitive angling, he never pushed it on his son. Instead, Chris let his son make his own name. That includes choosing his own sponsors. It just made sense for Cal to follow in the family tradition of representing Power-Pole.

“I’ve always looked up to my dad my whole life and he has guided me through everything,” Cal said. “I appreciate that he has made me do it myself and not just give me it. He teaches me instead of just handing it to me.”

“He took all the initiative on his own to make himself a great angler,” Chris said.