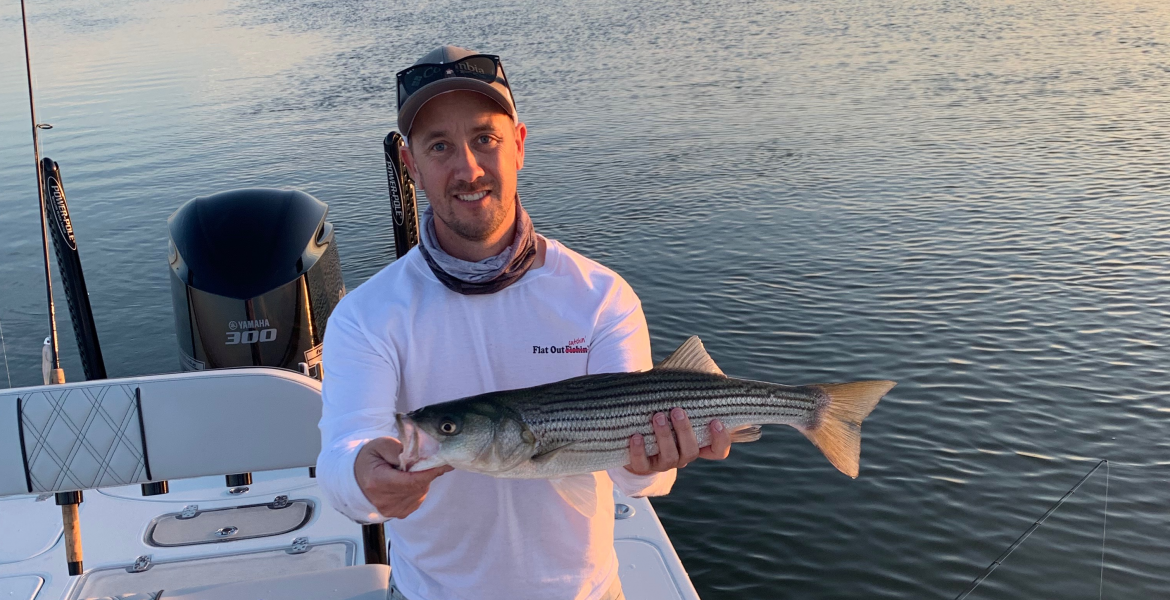 Captain Jesse Bloomquist of Flat Out Fishin’ Charters relies on the Power-Pole advantage as he targets shallow water striped bass in the backwaters of Margate, New Jersey.

“I’ve got two 8-foot Power-Poles mounted on each side of the stern set to stick me at a creek outflow,” says Bloomquist. “Depending if its an outgoing or incoming tide, I’ll plant both poles down with the bow into the current to position at the intercept points where stripers are entering and exiting from the bay into the creek and vice versa.”

Bloomquist expounds on the power of the poles compared to other spot-holding methods such as trolling motors.

“The Power-Pole anchors simply plant the boat solid — it just doesn’t budge like the GPS lock does on a trolling motor, which will dislodge and move around all over in a rushing current,” he says. “If I’m swinging back and forth, I’m spooking the fish. In addition, you need to be ultra-silent when stalking bass on the flats, which again, the advantage goes to Power-Pole Shallow Water Anchors.”

Bloomquist programs both his poles into one remote and accesses the integrated C-Monster App system on his smartphone to monitor all diagnostic readouts, so he knows when and how to adjust.

“We’ve got pretty swift currents in the Jersey backwaters when the tide is spilling out,” Bloomquist adds regarding the sturdiness of the Power-Pole anchors. “They can hold up to an extreme amount of pressure and won’t break or slip from the flow. It’s pretty impressive.”

When Bloomquist is fixed on a spot, the hunt begins.

“At dawn and dusk, I cast small paddletails like Storms, Z-Mans and Zoom soft baits into the creek mouths. Work the baits slow in the lower portion of the water column with a subtle twitch every few cranks as bass are hunkering down in the current to suck in baitfish such as spearing and peanut bunker,” Bloomquist says. “When the sun comes up, I focus on shallow flats and switch over to Stillwater Smack-It topwater poppers to make commotion. Stripers sit in 2- to 3-foot deep potholes among the flats. Gurgle the popper over and through the potholes for aggressive strikes.”

Backwater striped bass demand a stealth approach and mastery of position control. Put the Power-Poles down, and bass beware.