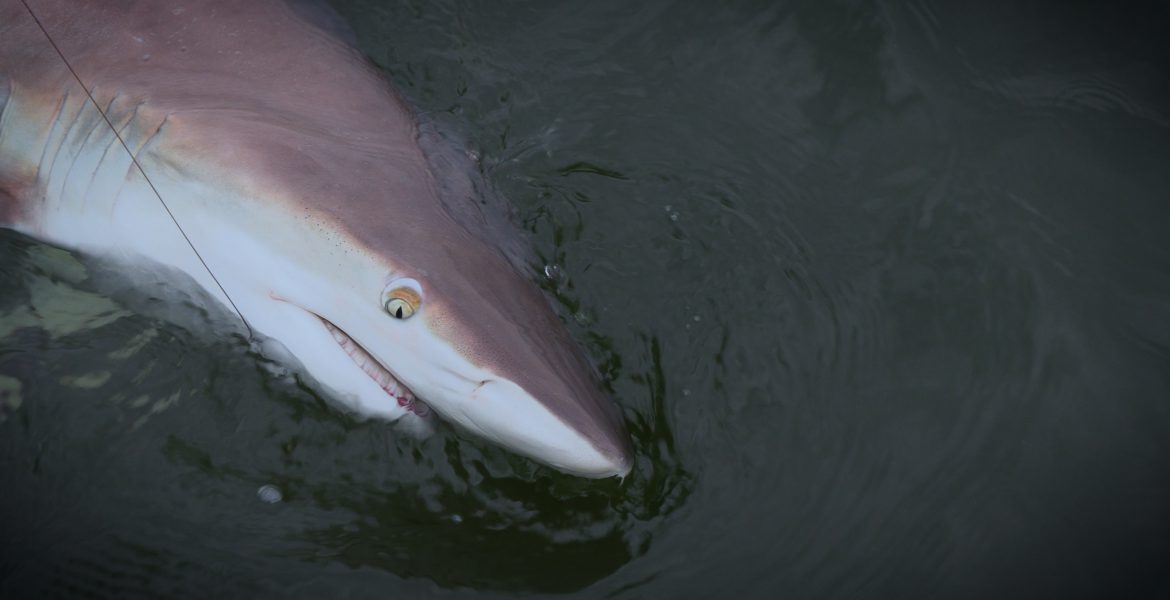 If you are a fan of Shark Week on Discovery Channel, you know that sharks –even really big ones — can inhabit very shallow water. It is especially true here in Florida where monsters can routinely be found in ten feet of water or less.

If you intend on targeting these apex predators, having the proper tools, including a Power-Pole Shallow Water Anchor, is essential for the catching of fish and also the safety and well-being of both the shark and the angler.

Having the proper weight tackle will ensure that a large shark can be landed quickly without overly tiring out the shark. Depending on the size of sharks you intend to target, you will need a sturdy reel — a spinning or conventional level wind style — that has a max drag of at least 40 pounds and a line capacity of at least 800 yards of 65lbs test. A 65-lb braid along with a 100-lb monofilament or fluorocarbon is a good general-purpose combination. Having 75-100 yards of mono will give a little bit of stretch when a shark is making its run and will avoid cutoffs should the shark drag line against underwater structure or rocky bottom. Of course, the bigger the shark, the heavier tackle you will need.

Along with the combination of lines, it is also a good idea to include a heavy leader to avoid having a shark biting through at the point closest to the hook. Four to five feet of coated wire leader will keep most sharks from doubling back and cutting through the leader. Make sure the leader is nylon coated or else sharks might detect the faint electric charge of the wire. Depending on the size of shark you target and the size of the bait being used, an assortment of circle hooks between 10/0 and 20/0 is necessary. A good rule of thumb is that the size of the hook should be about the same size as the fish’s eyes you are going for. The right size hook will ensure that it catches properly in the corner of the shark’s mouth and not further down its throat or gills.

Once you have the proper gear for chasing sharks, the next step is finding where the sharks are hanging out. A general rule is that if it is saltwater there are probably sharks around. If you are looking for something a little more specific, you should try and find points where flowing water bottlenecks or along deeper channels where sharks can traditionally ambush their prey. River mouths, especially where multiple rivers flow into the same bay and barrier islands located in strong tidal paths are ideal places to start. Power-Pole anchors come in handy when staking out a spot since they will enable you to position your boat on a sandbar or channel ledge while deploying baits into the slightly deeper water.

Since most sharks are opportunistic and indiscriminate feeders, the act of shark angling is less about technique and guile and more a straight battle of attrition. A dead or cut bait, preferably something that the native shark population is familiar with – for example, ray wings, jack crevalle carcasses or large chunks of lady fish – deployed down current from the boat, along with a little bit of patience should be enough to entice a strike. Once a shark picks up the bait, let it carry it for a bit. When it starts to make a run perpendicular to the boat, tighten the drag and firmly pull the rod in the opposite of the direction which the shark is running. This will help position the hook in the corner of the shark’s mouth and drive the point through the tough jaw tissue.

Then it becomes a game of tug-of-war between the angler and the shark. Constant pressure should be kept on the line during retrieval at all times without creating too much tension that could cause a line to snap. Power-Pole anchors are particularly handy during this stage because they can easily be retracted to use the boat to chase down the fish before it can spool your reel.

Once you manage to bring the shark to the boat, it might take multiple people to facilitate the release. If possible, it is best to keep the entire shark entirely submerged in the water, both for the safety of the shark and the angler. In some cases, however, bringing a smaller shark onto the deck of the boat may be the quickest option for hook removal and release. A tail rope may be deployed boatside to help control larger sharks and prevent flailing. After the shark has been brought under control, carefully remove the hook. If removing the hook is not possible, use a pair of bolt or heavy wire cutters to clip the line as close to the hook as possible.

It is very important to know what kind of sharks you may encounter while fishing. Many species of sharks that can be found in shallow water, including tiger, hammerhead and lemon sharks, are considered endangered. In many places, it is illegal to take a protected species from the water at any point and should be safely released as quickly as possible. This is especially important for sharks like great hammerheads, which will experience stress levels after a long fight that can be fatal to the fish. If you are unsure of the type of shark you have caught, it is best to treat it as a protected species.

Always remember that sharks play a vital role as the apex predator in the marine environment. While catching sharks, especially in shallow waters, can be an adrenaline-pounding experience, every effort should be made to return these predators back to their environment unharmed so that they can resume their role as the regulators of the ecosystem. Those that become adept at catch-and-release can even use those skills to aid scientists and researchers through various tagging and data collection programs. These programs can be provide vital information for future conservation efforts for sharks, which in turn helps preserve the entire marine environment for generations to come.