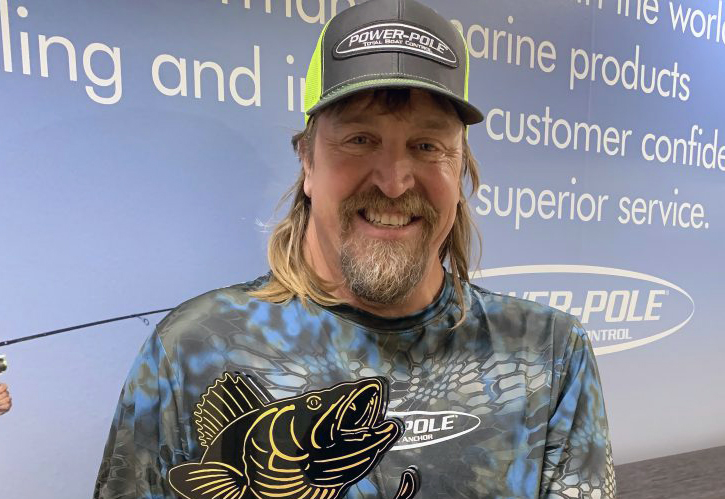 J.L. Marine lost a loyal friend — and one of its most colorful ambassadors –after the passing of pro angler Tommy Skarlis, who succumbed to a brain tumor last week. He was 55.

“He was a devoted and dedicated angler,” Power-Pole representative and friend Bryan Watts said. “Tommy was one of those guys that everybody liked. He was a great ambassador because he was always so happy-go-lucky and always willing to help out.”

“He always had a great attitude through everything,” Greg Watts added about Skarlis, who was diagnosed with cancer in early 2019.

Skarlis was the winningest competitive walleye angler in history.

Skarlis began his tournament fishing career in 1991. From 1993 through 1998, he fished the Masters Walleye Circuit (MWC) where he qualified for the championship all eight years, including winning the overall championship on Big Stone Lake, MN.

In 1996, Skarlis joined In-Fisherman’s Professional Walleye Trail (PWT). He thundered through the circuit, winning the prestigious “PWT Angler of the Year” title in 2004, snatching 17 top-ten finishes, capturing several “Big Fish” awards and qualifying for the PWT Championship 13 straight times. Skarlis earned the nicknames “Mr. Erie” and “Mr. April” by winning the first PWT event in 2001 at the Detroit River, and in 2002, at Lake Erie.

In 2008, he won the most prestigious title in walleye fishing – the FLW Walleye Tour Championship. Skarlis has qualified for over 40 national championships and is one of the hottest tournament anglers in the history of competitive sportfishing. Skarlis, who also competed on several professional crappie fishing tours, including winning the Crappie Masters National Championship in 2013, was named one of the Top-Ten Anglers on the planet by Outdoor Life magazine.