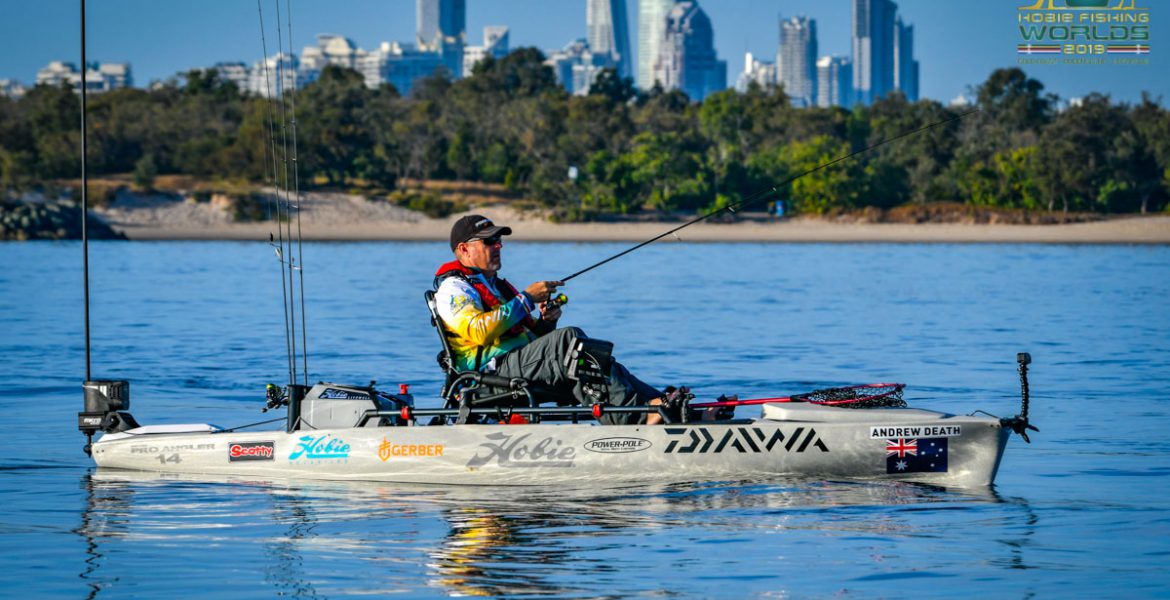 Power-Pole goes down under at Hobie World Championships

Even little boats need big stopping power which is why Power-Pole Shallow Water Anchors was proud to partner with the Hobie Kayak Fishing Worlds. The top international kayak angling event wrapped up onthe Gold Coast of Australia this weekend. Power-Pole was a presenting sponsor for the eighth annual event which was held in Queensland, Australia. It was the third time Australia had hosted the international tournament, including the inaugural tournament held in New South Wales in 2011.

45 anglers from 18 countries spread over five continents took part in this year’s competition. Anglers, who were provided a Hobie MirageDrive® kayak factory-fitted with a Power-Pole Micro Spike Driver anchor for the event, targeted yellowfin bream, which are closely related to porgy. Scores were determined by the top three fish brought to weigh-in. Power-Pole vice president Robert Shamblin and OEM sales representative Blake Hill made the trip down under to support the event and present daily awards to the competitors.

Australia’s Andrew Death held on to first place overall after posting 1.85 kg (4.07 lbs). Death finished the event with a three-day total of 5.79 kg (12.76 lbs). After a disappointing pre-fish practice, Death went back to his tried-and-true methos for catching bream by throwing crank baits, especially the matte balck Atomic 38, over shallow grass flats. These environments were ideal for deploying his Micro Spike Driver.

“If you’re messing around with a fish and don’t want to drift off your spot, it was an easy, convenient way to stop your kayak,” Death said of his Micro. “For anyone that’s fishing shallow water, this definitely converts into fish because you can stop and you don’t drift over the fish. Really a brilliant product and a bit of a game-changer.”