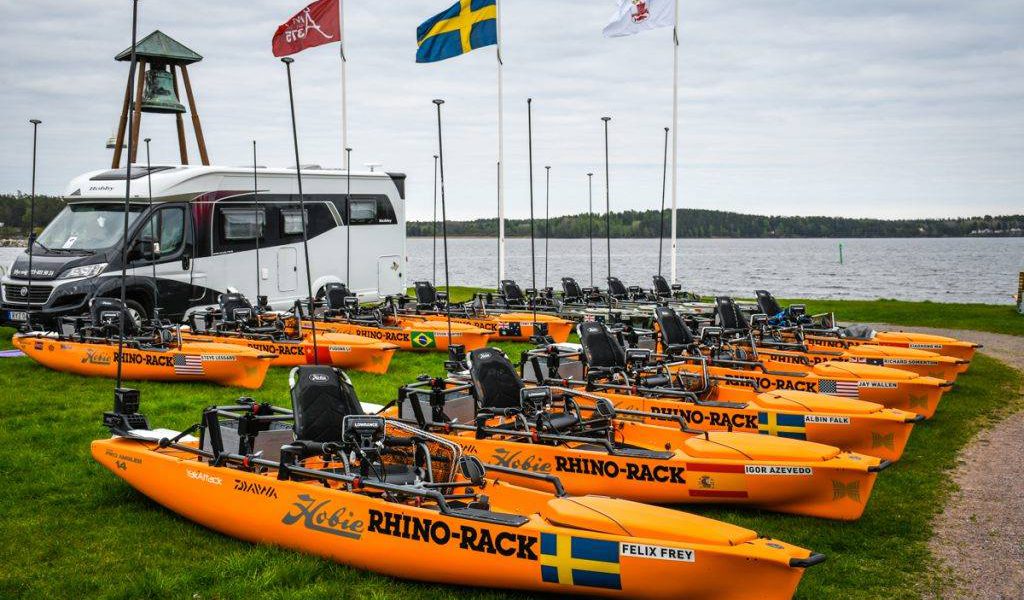 Forty-eight kayak anglers from all around the world descended upon the shores of Lake Vanern in Amal, Sweden, on May 21, 2018, to participate in the 7th Hobie Fishing Worlds. After the dust settled, German angler Salah Eddine el Barbouchi took home top honors.

“It was fantastic fishing for all 48 anglers, with a ton of action from both eligible species of northern pike and perch,” said Keeton Eoff, Director of Global Strategy and Development at Hobie. “The event connected respected kayak anglers from countries as far away as Australia, Brazil, China and Poland — it was a fantastic experience for kayakers to meet others with the same passion.”

With the win, el Barbouchi gave Europe its first kayak world fishing title, while the Hobie event saw tournament-legal totals of 188 pike and 88 perch caught, with el Barbouchi amassing a total length of 653 cm to take the top spot.

In this particular tournament, identical Hobie kayaks are provided to every participating angler. Each kayak is equipped with a Power-Pole Micro anchor and an 8-foot ultra-lite spike, both easily mounted with a specialized Hobie bracket designed to be compatible with light watercraft such as the Hobie Pro Angler 12 and 14 series. The Power-Pole ultra-lite spike weighs less than half what the Power-Pole heavy-duty spike weighs.

Robert Shamblin, president of Power-Pole, discussed how the Power-Pole Micro anchor and ultra-lite spike were being used by kayakers on Lake Vanern.

“Pike were biting near the grass lines, and anglers were setting the spike just outside the grass,” Shamblin said. “Another big benefit was that when an angler was hooked to a giant pike, the planted spike secured the kayak and prevented the big fish from dragging the kayak all over the place on a sleigh ride. It provided leverage to fight the fish effectively and stabilize the platform, and once the fish is landed, the wind isn’t blowing you into the spot.“

Eoff expounded on the utilization of the Power-Pole Micro anchor on kayaks.

“Anglers don’t have to be at the mercy of the wind,” Eoff said. “The main function (of the Power-Pole anchor) is that anglers can be thorough and precise to work a good spot cast after cast with different lures, rather than drifting by on a one-shot deal. It’s not ‘drive-by’ fishing. The anchor changes the functionality of the kayak into a stationary platform.”

“I can remember at the Hobie Fishing World Championship in 2013 in Australia, it was blowing 35 knots when a storm front came through,” said Shamblin. “All the kayaks rooted down with the Power-Pole Micro anchor and spike — not used as a fishing tool, but as a safety implement to keep them from capsizing. It was practice in design that was used as a safety feature as the storm blew through.”

“Whether an angler placed 1st or 48th, they had the same great experience fishing in a wonderful environment in Europe’s third-largest freshwater lake,” he said. “Kayak anglers from all around the world came together on a social level to swap stories and build lasting friendships.”