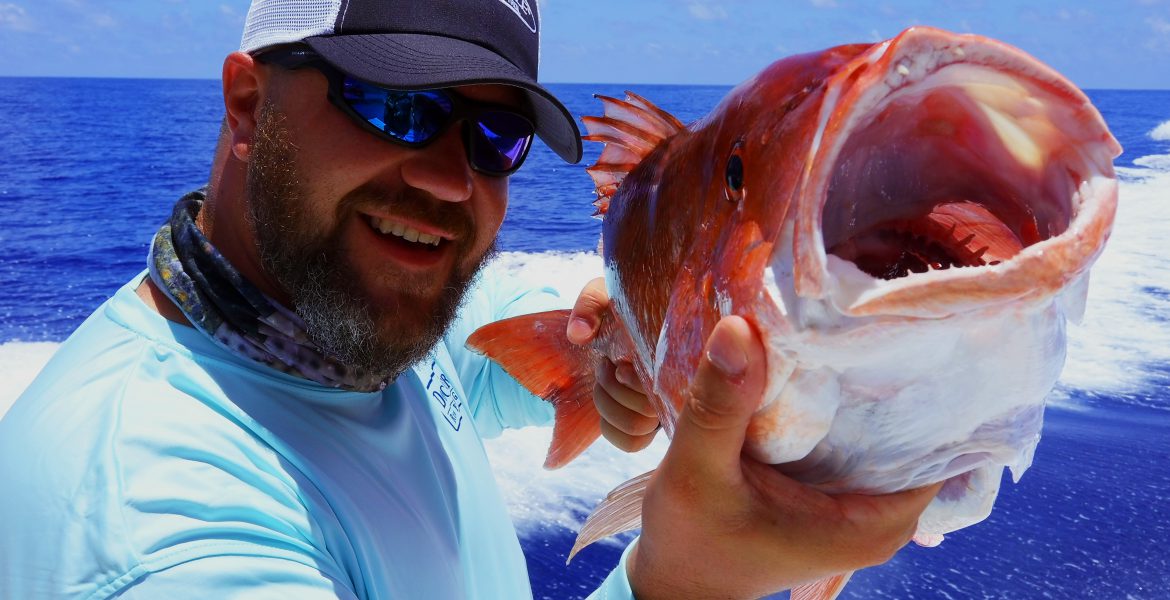 The small cards on the counter of the beachfront condo underscored what the weekend that was about to occur off the coast of Southwest Florida was truly about.

The cards featured a veterans crisis hotline with a 1-800 number printed on them, a reminder that even the strongest heroes need help sometimes. That is why Power-Pole Shallow Water Anchors was proud to partner with Reunite the Fight for the second annual Operation Semper Fish in Fort Myers.

Each year, the non-profit organization brings former military personnel, particularly those that are still dealing with the emotional side of their service, to Fort Myers, Florida for a weekend of some of the best fishing that Southwest Florida has to offer – both inshore and offshore. The goal is to give the veterans some much deserved down time while allowing them to form a network of friends and fellow soldiers that can provide support should they ever need it.

According to the U.S. Department of Veteran Affairs, nearly 20 former service members commit suicide every day in America. Of those, only 30 percent sought some form of help through the VA system. Reunite the Fight hopes to combat that trend by providing resources and a support system for former combat vets.

“This is like therapy for these guys,” RTF event director Sean Simmonds said. “They are creating a comradery while they build a brotherhood and get some rest and relaxation. We’re combating crises like PTSD (Post Traumatic Stress Disorder) or TBI (Traumatic Brain Injury) or veteran suicide. Just getting a little down time and getting away from everyday life is a way to reboot and recharge so they can get back to the grass roots of what they are trying to do. Sometimes you just need a little bit of focus.”

The mission is made possible by generous sponsors, including Power-Pole, along with a group of selfless volunteers and a small armada of local boat captains and guides who take the vets fishing at no expense to them.

The weekend got off to a wet start as a storm front rolled through Southwest Florida, forcing the pair of boats carrying the veterans to alter course a bit and head toward the artificial reefs and hard bottom ledges in the 60 to 75 feet depth range. After weathering a few squall lines, the clouds that loomed on the horizon for much of the morning finally dissipated and the vets were able to test their mettle against some of the bicep-busting species that congregate on the structure. There was a mixed bag of hookups with a variety of species including amberjacks, sharks, and goliath grouper. Even a school of mahi mahi made an appearance. Enough red grouper came over the rails to ensure that a feast of fresh grilled fish would be on the agenda for later.

Day 2 took the group into even deeper waters on the Fishing Fever, a 41-foot Luhrs Convertible, in search of American red snapper. A slow start to the fishing action left plenty of time for the vets to reminisce about the time that they served, share jokes, enjoy a beverage or even just take a nap on the deck.

“It’s always great to be around vets, combat vets especially,” former Marine Hector Luis Soto said. “We’ve all endured the suck together and when you speak with other vets who have smelled that same dirt, chewed that dirt, it’s great.”

“You meet guys at work or guys where you live. You have friends but you don’t have brothers like these guys that you served with, guys that understand that certain morbid sense of humor that only certain guys will get,” former Marine Matt Henderson said. “It’s a completely different bond.”

On the final stop of the day, approximately 125 miles from shore in nearly 200 foot of water, the snapper bite caught fire. Within 20 minutes, the group of six anglers had caught their limit of red snapper. Words of congratulations were punctuated with exhausted high fives before heading back to port.

To finish off the veteran’s weekend of saltwater therapy, the group explored the backwaters of Punta Rassa looking for snook and redfish aboard Power-Pole-equipped Wellcraft Bay boats. Using the Power-Pole Shallow Water Anchors to put the anglers in prime positions, the groups stalked the mangrove cuts along the Caloosahatchee River watershed. For most in the group, it was their first experience with that style of shallow water fishing. Along with the picturesque views of the harbor, the veterans were able to pull in a handful of wily mangrove snapper and voracious jack crevalle.

Thanks to Reunite the Fight, the volunteers and sponsors, the veterans departed South Florida with a cooler full of meat, a vibrant South Florida tan and a new trove of fish tales to tell their friends back home. More importantly, however, they left with a sense of peace that comes from spending time on the water and a brotherhood of friends that they know will always have their backs should the need arise.

“It helped me a lot mentally,” former Marine machine gunner Tyler Klemas said. “Along with the stuff you go through in the military, you also have your everyday stresses that everybody goes through. A lot of the military experience puts an extra weight on that.

“Being around people that you served with, that understand that extra weight that gets put on your shoulders has been really good for me.”

To learn more about Reunite the Fight and its mission to help military veterans, click here.