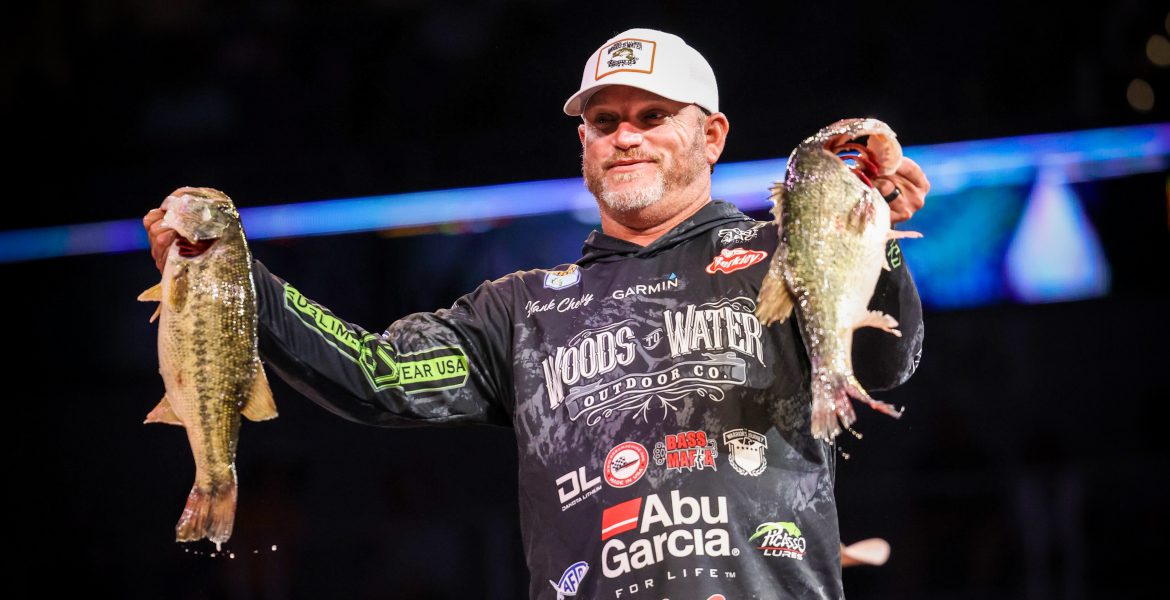 Looking for the full recap and photos? Click below, otherwise continue reading for archived updates from this year’s Classic.

The biggest stage of competitive bass fishing returns to Fort Worth, TX for the 51st annual Bassmaster Classic on June 11-13. The Power-Pole media team will be there from Media Day to the final weigh-in bringing you updates, stories, photos and videos.

Don’t forget to check out Power-Pole’s Classic Preview where we talk to our former Classic champs to find out what it is like when they were able to hoist the trophy up on competitive bass fishing’s biggest stage.

It’s championship Sunday on Ray Roberts and while the weather promises to be better than this yesterday, it will likely be just as unpredictable out there. The Power-Pole media team will be following along with the leaders live from the water so stay with us.

With a total weight of 50-14, Hank Cherry becomes just the fourth angler in Classic history to win back to back championships.

The win capped off another amazing showing for Power-Pole in the Classic. Every member of the Super Six had a Power-Pole anchor on their boat.

We are underway here at Roberts and if the past two days are any indication, the winning bag could be pulled in the first two hours of fishing. Each of the top three – Hank Cherry, Chris Jones and Steve Kennedy all had their first fish of the day within a half hour of launch.
The wind and clouds that have been a constant over the last two days is gone so it is likely to get pretty hot, fairly fast.

The Power-Pole Shallow Water Seminar series returns on the Power-Pole main stage starting at 11 a.m., Dave Ferrell and Johnny Guice teaching their favorite shallow water techniques, including setting yourself up for success with tips on reading terrain and proper boat positioning.Pro angler Derek Hudnall  teaching you his secrets for rigging and working finesse baits in shallow water starting at 11:30 a.m..

At noon, join Tyler Rivet as he shows you some of his favorite baits and more when targeting bass in shallow flats and beds.John Crews returns at 2 p.m. for his seminar on power management and Caleb Sumrall will finish off the day at 3 p.m. to show you more of his shallow water techniques.

While you are there don’t forget to check out Power-Pole’s line of apparel and headwear made specifically for the comfort and performance of bass anglers.

The Power-Pole media team will be on the water following our top anglers as they chase their dream of becoming a Classic champ. Be sure to use #PolesDownTrophiesUp to get the latest action and exclusive content on social media.

After a rough second day, Power-Pole is still in the perfect position to continue its Classic dominance when it comes to hoisting that trophy on the big stage. The top 10 anglers heading into championship Sunday are all Power-Pole equipped.
Last year’s champion Hank Cherry has assumed the top spot on the leaderboard as he looks to become just the fourth champ to pull off back-to-back victories at the Classic. Rick Clunn, Kevin VanDam and Jordan Lee are the only anglers to win in consecutive years.
If the Super Six were to be held after Saturday’s action, it would also include Justin Kerr, Steve Kennedy, Chris Jones, Matt Arey and Chris Johnston. Other notables to make the cut include Power-Pole’s sponsored angler Cory Johnston, former AOY Scott Canterbury and Classic fan favorite Matt Robertson.
For full results from Day 2, go to: https://m.bassmaster.com/leaderboard/tournaments/2021-academy-sports-outdoors-bassmaster-classic

After the start was delayed to 8:20, the anglers are doing their best to make up for lost time. Day 1 leader Steve Kennedy already has a fish in the box thanks to some high-speed working of some submerged islands and grass lines. He’s also drawing quite the entourage to start the day with 15 spectator and media boats in tow.

With lightning lighting up the skies over Roberts and imminent rain in the forecast for the morning, the anglers are lined up at the ramp waiting to put in as officials push back the start of launch because of inclement weather.
This adds another wrinkle to an already uncertain tournament because the majority of the fish caught on Day 1 was during the first two hours of play. That window may not be open as it seems likely that the launch could be potentially be delayed until 8 a.m. or later.

Come and meet some of the biggest names in fishing at Power-Pole’s booth No. 825 in the main exhibit hall of the Classic Expo on Saturday. Fishing legend Bill Dance will be available starting at 10 a.m. Scott Martin will be making his appearance at 4:15 p.m.

The Power-Pole Shallow Water Seminar series will also return on the Power-Pole main stage starting with pro angler Derek Hudnall at 11:30 a.m. Hudnall will be teaching you his secrets for rigging and working finesse baits in shallow water. John Crews returns at 2 p.m. for his seminar on power management and Caleb Sumrall will finish off the day at 3 p.m. to show you more of his shallow water techniques.

We are underway at the 51st Bassmaster Classic. It is gonna be hot and windy out on Ray Roberts Lake today and the waves made for a sporty launch. The Power-Pole media team will be giving you live updates from the water all the way through to the weigh-in.

After the first day of competition at the Classic, the top of the leaderboard had two common themes; they were able to take advantage of the flurry of action during the first two hours of the day and they had Power-Pole anchors on their boat while they were doing it.
With Lake Roberts over four foot over flood stage and the wind pushing hard toward the north of the lake, many of the Power-Pole sponsored anglers found themselves fishing along the flooded tree lines in protected coves to start the day. These anglers, including Day 1 leader Steve Kennedy, Drew Benton, Chris Jones, Hank Cherry and Patrick Walters, we’re among those rewarded with an early five-fish bag and the opportunity to cull up their overall total over the remainder of the day.
At the end of the first day, the top 16 on the leaderboard are Power-Pole anglers. To see the full results, click here: https://m.bassmaster.com/leaderboard/tournaments/2021-academy-sports-outdoors-bassmaster-classic

Benton has been in his element so far on Day 1, flipping the shallows with his Power-Pole down. The Team Pro not only has his bag but had already culled up three more times while fishing a flooded field.
He is currently sitting in fifth place according to Bassmaster’s live leaderboard.

Cory Johnston put two fish in the box within 15 minutes at his first stop and Drew Benton already has a 5-fish bag before 8 a.m.

As expected, finesse fishing and flipping the flooded tree lines has been a favored tactic so far.

As part of Power-Pole’s Shallow Water Seminar series, some of the top anglers will be live on the Power-Pole main stage in booth No. 825 teaching you the tips and secrets to mastering fishing in shallow water environments.

Starting at 11 a.m., Dave Ferrell and Johnny Guice will be teaching their favorite shallow water techniques, including setting yourself up for success with tips on reading terrain and proper boat positioning.

At noon, join Tyler Rivet as he shows you some of his favorite baits and more when targeting bass in shallow flats and beds.

Team Power-Pole angler John Crews Jr. will be sharing how to make the most of your batteries’ power supply using the Power-Pole CHARGE Power Management Station at 2 p.m.At 3 p.m., Caleb Sumrall will be showing off more shallow water techniques to catch tournament-winning sized bass.

Greetings from the Classic Media Day presented by Power-Pole. Be sure to follow along on TikTok (https://vm.tiktok.com/ZMdRBJsNj/) and Instagram Reels (https://instagram.com/power.pole) for instant videos from the event.

Shallow Water Action In Play
With Lake Roberts experiencing heavy flooding and temperatures pushing into the nineties, many of the competitors admitted that they will have to change tactics from the early summer deepwater patterns they had expected and will instead turn their attention to shallow water grass flats. It isn’t a stretch to say that how an anglers puts their Power-Pole to work, will determine who wins this year’s Classic.

“As soon as I crossed the dam and saw those flooded conditions and the cover in the water, I knew they were going to be in shallow and that I was going to be dropping these a ton,” Team Power-Pole angler Drew Benton said as motioned to his anchors. “I’ll be fishing to my strengths and the way I like to fish so it should be a good Classic for me.”

“It’s gonna be a windy day, especially tomorrow so you don’t want to mess up your spot by blowing in on it,” Buddy Gross said. “I plan on using them. A lot.”

“You are going to have to use your anchors because everyone is going to be doing the same thing, flipping bushes,” Todd Auten said. “It’s gonna come down to who gets the biggest one after putting their Power-Poles down and getting one out of those bushes.”

Going International
In the 51 years of the Bassmaster Classic, Takahiro Omori has been the only person to win the championship — in 2004 on Lake Wylie, North Carolina — that was born outside of the United States.

With three competitors from Canada — including the Johnston brothers, Cory and Chris — and two from Japan — Masayuki Matsashita and Taku Ito — their might be a second foreign-born champ after this year’s event. It also shows just how big bass fishing has become as an international sport, especially over the last decade.

“Many young Japanese anglers want to go to that big U.S. tournament, the Bassmaster Classic,” said Ito, who credits watching Omori’s win as a young angler as his inspiration. “It is the goal for many anglers.”

“It would be awesome to be just the second guy to do that,” said Cory Johnston. “It puts Canada and us Canadian anglers on the map when we do these things and it gets a lot more kids interested in the sport of bass fishing at the high school and college level.

“To be able to be the first Canadian to hoist a Bassmaster trophy I think would be pretty special.”

New Weigh-in Methods will Aid in Conservation
In order to help ensure the health and safety of the fish caught during the tournament, the fish will be weighed on an official scale lakeside during the first two days of the event and released. Anglers will be allowed to bring two fish with them to the live weigh-in to show off for fans, who will learn of the overall weight live.

The final day of weigh-ins will be held in the traditional manner so that no suspense is lost. The overall effort is expected to reduce the numbers of fish that make the one hour trip each way between Dickies Arena and Lake Ray Roberts in half.