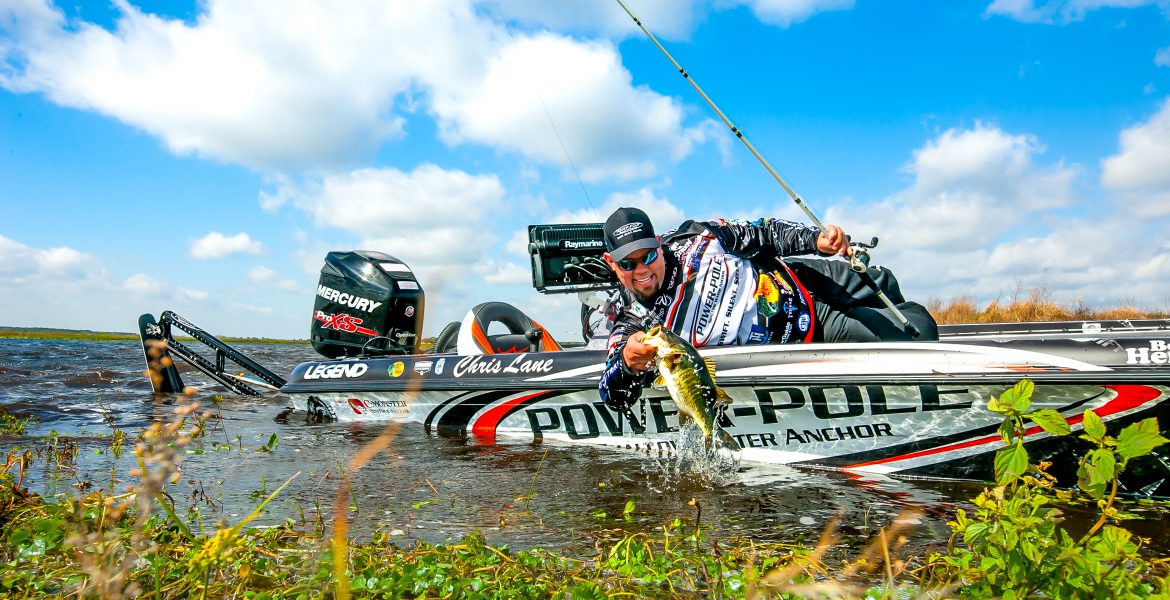 Chris Lane has been a veteran to Power-Pole shallow water anchors for 12 years now and he continues to proudly sport our anchors on the back of his bass boat – in his signature orange, of course.

The 2012 Bassmaster Classic win on the Red River in Shreveport, Los Angeles was the pinnacle in Chris Lane’s career. For his Classic win, Lane’s three day weight total was 51 lbs., 4 oz., winning by a mere three pounds. He credited an important catch to his Power-Pole anchors by saying, “One of the moments I will always remember during the second day of the classic is when I had a bite but missed the fish, I was able to stop and position my boat by putting down my new ten foot Power-Pole Blades, make a few more casts and caught a five pounder which was one of the keys to winning the Classic.”

With over $1 million in career winnings, Chris Lane has relied on the quick stopping power of his poles and is excited for what the future holds in Power-Pole innovation.

At ICAST 2017 in Orlando, Lane introduced the new Power-Pole VISION and Power-Pole CHARGE, which will launch in Spring 2018. “This is going to be your new dash; no more wires, no more plug ins, no more connectors, no more gauges.” Chris shows the total boat control that this tablet offers as the new control pad on your boat, allowing you to manage every gauge, switch, and power source to all of your boat accessories in one place.

Chris Lane is not only known for his unique fishing techniques, but also his contagious personality and giving spirit.

For the past 10 years Lane has hosted his Kids Fishing Camp on his favorite lake – Lake Guntersville – in his home state of Alabama. He offered up his expertise to kids alongside some other elite anglers to coach the little one’s by “Reeling in Future Pros.” Lane says he remembers being around events like this one as a kid and he wanted to put on the same kind of thing for others. He was able to help them learn casting and knot tying, even some safety tips while they caught a few fish of their own. “It’s all about food, family, fun, and fishing.”

We are proud to have anglers like Chris on our team and look forward to a long relationship of providing innovative products that help ALL of our Power Pole Pro’s exceed in their field.