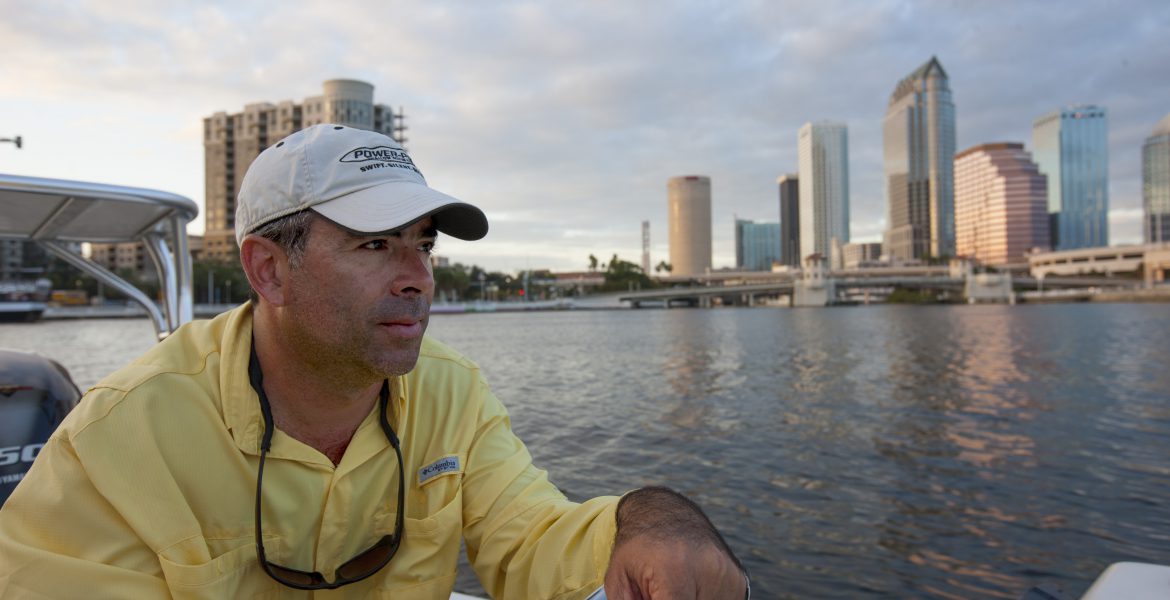 TAMPA — Necessity is said to be the mother of all invention. John Oliverio needed a better way to catch fish.

While fishing the grass flats in Sarasota Bay, Oliverio found he needed to be able to stop his boat quickly and precisely to catch the fish that he knew were there. From that necessity, he invented what would come to be known as the Power-Pole Shallow Water Anchor.

“I thought, ‘There’s got to be a better way. Why isn’t there something like this already out there,” he said.

By 1999, the idea had gone from a simple concept in John’s head to a working model made from pieces of LEGO® to a series of prototypes constructed on his front porch to a working model he built in his garage. The first production model was completed in 2000.

“Twenty years later, here I am manufacturing Power-Poles and shipping them all over the world,” Oliverio said. “I never thought it would have such success and that it would be as well used by some of the best anglers in the world. It’s actually quite a dream for me.”

That success includes a state-of-the-art manufacturing and development facilities in Tampa. The business model went from selling the product out of John’s garage to being sold through over 3,500 dealers, retailers and boat manufacturers. Power-Pole Shallow Water Anchors are even considered standard equipment on many new boats being sold.

“To watch this company grow from only ten or twelve employees to now you are looking at over 100 employees I’ve been totally amazed,” said former Redfish Champion Bryan Watts, who along with his brother, Greg, were the first two anglers to ever purchase a Power-Pole for use in a competition.

Both credited John for never losing sight of what made the company successful at its core from the very beginning while carrying on its mission “to share a sense of adventure with the world through high performance marine products while instilling and inspiring consumer confidence with superior service.”

“John has been the backbone of this company and even after 20 years, he is still John.” Greg said. “He still cares about every person in this company.”

That remains true even as the company has undergone exponential growth over the last decade, starting with the introduction of the Power-Pole Blade models at ICAST 2011 and the expansion into the current 48,800 square-foot facility in South Tampa in the fall of 2012. Power-Pole angler Chris Lane raised the trophy at the Bassmaster Classic in 2012, further raising the company’s profile.

“It’s made fishing more fun. It’s put trophies on my shelf,” said fishing personality Scott Martin, who along with his father, Roland, were some of the earliest supporters of the product. “I’ve been one of the very first guys running a Power-Pole on the back of my boat and I’ve been honored every day that I hit that down button.”

As benefits of the Power-Pole anchor were recognized across the globe and it began to be used in a variety of applications, it’s not an exaggeration to say that Oliverio’s invention revolutionized fishing at every level in every shallow water condition. Two decades later, the product has become so ubiquitous that it is tough to go to any boat ramp in America and beyond and not see a boat equipped with a Power-Pole.

“Nothing that has come on the market has changed the game of freshwater and saltwater fishing like John Oliverio and Power-Pole,” Reel Animals host Mike Anderson said.

“Twenty years ago I was covering the Redfish Cup and I remember seeing a Power-Pole on the back of a boat and I remember going ‘that boat looks so strange with those things,” ESPN Outdoors host Mark Zona said. “When I see a boat now, whether it is on the water or I’m going down the highway, and I don’t see a Power-Pole on the back of it, I’m like ‘that boat looks so weird without one.’